Huda Giddens, a young mother and educator, founded the school in 1972 as a half-day preschool. She named it The Happy Medium School in an effort to capture the spirit of the unique combination of educational philosophies and environment dedicated to educating the whole child. The original site for the school was in ’s University District neighborhood. 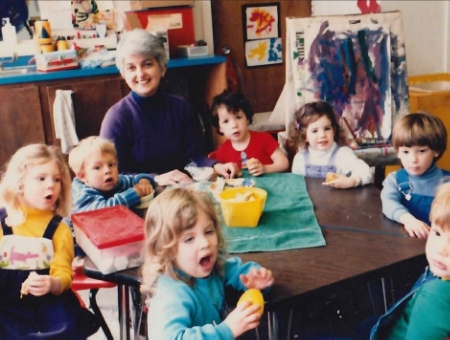 1972 Huda Giddens founded The Happy Medium School, a half-day preschool sited near Laurelhurst, so named to capture the spirit of a unique combination of educational philosophies dedicated to educating the whole child.

1975 Happy Medium sponsored its first annual Arts Festival, starting a tradition of celebrating community and the arts at the school.

1976 A scholarship fund was started to broaden the socio-economic basis of the school.

Late 1970s Home visits were established, with teachers visiting each child’s home prior to the start of the school year in order to become acquainted with the child and family.

1982 The Happy Medium School relocated to 20th and in the heart of the Central District, to offer access to a more diverse community and socio-economic environment and to accommodate newly-added kindergarten classes.

1984-85 Huda Giddens stepped down as founding director and Susan Kerr became the second Director of The Happy Medium School.

1985 The first annual Auction was held as a fundraiser to provide financial aid for families.

Late 1980s An extended-day program was added to make attendance at Happy Medium possible for many working families. A focus on creating a welcoming, supportive school climate encouraged a significant population of single parent, adoptive, and gay and lesbian families.

Early 1990s The served more than 120 children in grades preschool – 3rd. Increased enrollment necessitated the primary program moving to a building shared with other schools and social service agencies.

1994 The first annual Harvest Festival brought families together to share food and dance to the band, Bakra Bata.

1995 The school moved to its current location in the Central District at and South Lane Street.

1997 The Southern Poverty Law Center recognized The Happy Medium School as a model of multicultural education for its anti-bias curriculum, featuring the school in its “Starting Small” video and book, published as a training tool for early-grades educators through the Center’s Teaching Tolerance program.

1997-98 Susan Kerr stepped down as Head of School; Patty Cogan became Interim Head for four months while the Board conducted a search.

2004-05 The Board initiated a school-wide process to select a new name for the school. Suggestions were solicited, discussed and voted on within the school community. A consulting firm facilitated the final selection, , honoring founding director Huda Giddens. The first annual Alumni Reunion was held.

2005-06 became the official name of the school at the start of the school year. Joan Beauregard was hired as Acting Head of School for a year as David Katz took a sabbatical to travel with his family in .

2006-07 Following David’s decision not to return as Head of School, the Board asked Joan to stay on for the school year while they conducted a search for a permanent Head of School. The teaching faculty completed a Scope and Sequence for assessing students’ academic development. Enrollment of 200 students was achieved for the first time in the school’s history.

2007-08 The Board invited Joan to continue as Interim Head of School for another year while they continued the Head search, a position she remains in through June 30, 2008. In March, following a two-year national search, Gilmore, Jr. was appointed the next Head of Giddens School, effective July 1, 2008.

2014 A formalized Diversity Statement was created and approved.

2015 A major remodel of the library, art room, front hallway, and administrative offices bring expanded and fresh spaces for our staff and students.

2015 After a national search, Dr. Morva McDonald was unanimously selected to become Head of School.

2016 The Strategic Planning Committee is convened by the Board of Trustees to establish a long-range plan for Giddens School.

2018 A groundbreaking ceremony was held to celebrate our new campus on Beacon Hill.

2019 Following the mandate from the Strategic Plan, the Board of Trustees adopted an updated mission statement.